Perception constructs our memories, shapes our thoughts and creates our reality, and yet it is a difficult concept to understand; knowing that people have different perspectives and think differently is a start. All objects have different meanings for different people because everyone has had a different experience with said object. The object that I happened to stumble upon was a tiny miniature Pokémon, on the beaches of Tofino. Although the object might not say much to the “average Joe” but to me, it reminds me of my entire childhood and prompts memories that I had kept dormant for years.

The contradiction that I am faced with is that perception does not create one’s reality because there is only one reality. Reality is tangible in the eyes of the beholder and there cannot not be another reality just because there are different perspectives. Reality is everything around us from the keyboard I am typing on to the man groaning next to me and to the dread work environment that they call a library. It’s all happening now and it’s all real; just because I have a different perspective on whether or not the work environment is dreaded, it’s still a work environment in our reality that cannot be changed nor altered. There can be different opinions about the environment and or the stuff around it but you cannot call a keyboard an ipad just because you have a different perspective on what is really is. In reality the Keyboard is not an ipad but in fact it’s nothing less than a keyboard that is being used to type these words.

The contradiction can solved in some ways but will be difficult to understand because of its sheer intensity. Everyone on our planet has a different meaning for everything. The meaning may be similar to one another but there are slight changes to it; the same applies to reality. People can shape their own reality because their brain can create an alternate universe in which they achieve all their goals; although the universe is not “real” and never will be real it is still there in his mind. Every time we learn something new or find out something that is cool, the brain can incorporate it in to their reality. Again the reality isn’t real but instead is nothing less than a figment of your imagination. Perspectives build your life’s by giving everything you know a meaning. It lets you understand and tells you how to feel because you have a perspective on everything.

My philosopher doesn’t really solve this problem but instead gives brief explanations on reality and perspective. Al-ghazil, my philosopher says that perspective is the key knowledge to understanding god  and that without perspective we would be nothing less than animals. I think what he meant by that is we have a perspective for a reason and it’s to be used to acquire more knowledge about god and his teaching. My group members on the other hand think that there are different perspectives that build different realities. Realities can be different for every individual but there is only one reality in which we all live in. Our perspectives is what build and shapes our reality and creates our very own version of “real”. 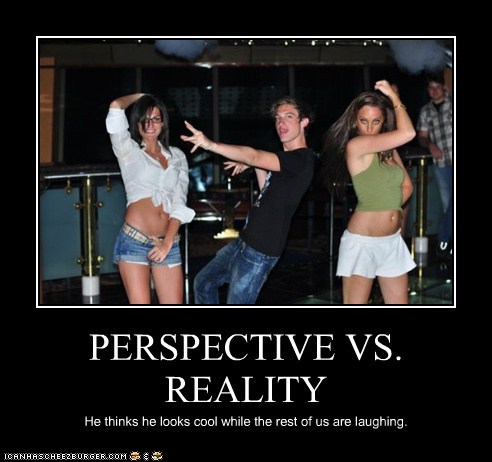