As we learned from the news, Hong Kong protesters have occupied major districts in Hong Kong to demand full universal suffrage for the city, a culmination of decades of frustration among the city’s democracy activists. But as protests in this city enter a stubborn second week, there hasn’t been any real breakthrough.

During the movement the leader of HK who is currently C.Y. Leung, was labelled as “unloved leader” judging from how he reacted to the protest. Most suspicion were C.Y. Leung is secret puppet controlled by the central communist government,

“He is in daily communication with Beijing,” says Willy Lam, an adjunct professor at the Chinese University of Hong Kong. “C.Y. is a very obedient cadre.” 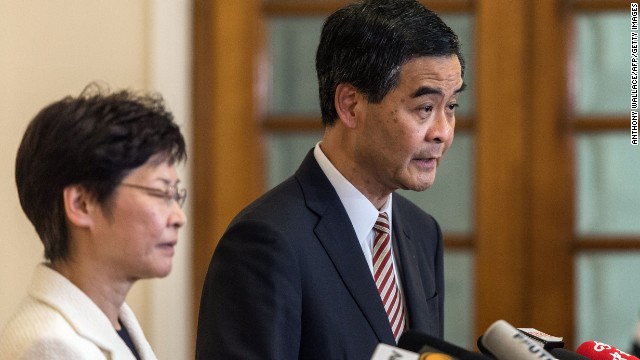 Since the return of HongKong in 1997, many voices against the system were the un-democratic society would have take place instead of the original “democratic” colony. Therefore the appointed chief executive of HK could be suspected as an internal decision from the central government instead of being voted by HK citizens, so that leads to the confusion, Who is actually leading HK?

Based on the facts and statements we can break the matter into following argument:

Each of the statement can be further explained:

To elaborate this matter, I found it necessary to go a little more specific. The basic law guarantee the fixed capitalism system for HK another 50 years however, due to the uncertainty of the HK social condition, majority of the population sense a early move from the central government which means that the capitalism system is possibly shifting towards a similar socialism system that is implemented in the mainland. Therefore, the democracy of HK is desperately concerned.

Joint Declaration of the Government of the United Kingdom of Great Britain and Northern Ireland and the Government of the People’s Republic of China on the Question of Hong Kong, was signed by Prime Ministers Zhao Ziyang of the People’s Republic of China (PRC) and Margaret Thatcher of the United Kingdom (UK) on behalf of their respective governments

Moreover, the un-transparent government mechanism have influenced mainland for so long that the population of mainland China may not have the solid fact to support the HK citizens for their best interest. some anxiously worried that HK is gradually losing it title of “the last free soil of China”, due to the influence over the central government.

Either way, the pursuit democracy will witness more sacrifice and setbacks for both sides of the people. Reason is the best way to find the truth.