According to the United Nations Convention Against Torture, torture’ means any act by which severe pain or suffering, whether physical or mental, is intentionally inflicted on a person for such purposes as obtaining from him or a third person information or a confession, punishing him for an act he or a third person has committed or is suspected of having committed, or intimidating or coercing him or a third person, or for any reason based on discrimination of any kind, when such pain or suffering is inflicted by or at the instigation of or with the consent or acquiescence of a public official or other person acting in an official capacity. It does not include pain or suffering arising only from, inherent in or incidental to lawful sanctions.” (United Nations Convention Against Torture, Article 1)

I often ask myself whether torture is justifiable in certain situations such as the ones undergone in Guantanamo Bay by the U.S. government. Is it the means or the ends that really matter? And can torture really be justified?

As a method of retrieving information, torture can be quite effective. Although this is true, the information that is gathered is often false due to the unexplainable pain one undergoes. In stressful situations like these, an individual must often say anything to bear the pain they feel. In a particular example, Mohamedou Ould Slahi, a twelve year innocent prisoner is charged with helping Al-Qaeda by training those that committed the 9/11 attacks. The only reason he was taken away was because his name came up when someone was being tortured. Slahi is still captive, and up until now there has been no proof that is guilty.

Personally, my beliefs on torture is that it is an act of immorality, and unjustifiable by any means. The fact that one must undergo “severe pain or suffering” which can ultimately cause death or serious brain damage is extraordinarily disturbing, regardless of whether the individual is guilty or innocent.  Often people become insane, with certain “sensory deprivation” activities often resulting in 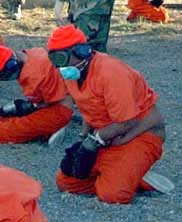 confusion, disorientation, and hallucinations; where individuals must wear blindfolds, headphones and masks to block out their surroundings.

In order to achieve a higher understanding of what happens in a Guantanamo bay style of detention camp, I decided to investigate further. As a result I found myself watching the documentary “Torture – The Guantanamo Bay Handbook” by UK’s channel 4, where the appalling conditions of a camp were replicated, and a handful of volunteers had the “Guantanamo Bay experience”.  The individuals taken were on both sides of the spectrum; where some agreed with Americans utilizing torture and some did not. The experiment would last approximately three days. What initially struck me was that many of the individuals could not handle twenty-four hours of the experiment. In fact, one volunteer was forced to drop out of the experiment because he had begun to show the initial signs of hypothermia.  After the full experiment ended, only a couple individuals were left and those that agreed with torture had completely changed their minds. This goes to show you that it is much easier to demand and say something than it is to actually go through it. This leaves me extremely curious to see what Dick Chaney would say, had he been a volunteer in the experiment.

Kant would perceive torture as wrong no matter what the circumstances are. He would argue that torture is never the right thing to do, even though the circumstances “might” allow it.  Morally, having a few individuals undergo extreme mental and physical pain would be wrong because there would be other ways of dealing with the situation. Ways that in his mind would seem suitable for his “right” mentality.

When it comes to “maximum happiness” utilitarianism would view torture as a correct means of producing the maximum amount of happiness for the most amounts of people. An example of this would be in the U.S. Regardless of whether the individuals in Guantanamo Bay are innocent or guilty, having them there allows the public feel a sense of security because the “villains” are where they should be. They would argue that, as long as it helps the bigger cause and allows them to retrieve information, anything goes. And in this case, having only a few hundred individuals suffering intensely is better than having the masses unhappy.

The question I leave is whether you agree or disagree with torture, and Guantanamo Bay?