Lines on a Mind Map

Knowledge is the connections we make between concepts.

To explain knowledge, I am saying the lines we draw on mind map actually represent our knowledge, not the words we write on the paper. To actually know something means you can apply it in different ways, or express its shape with different forms. Competence and Propositional Knowledge fits within my own boundaries of what I think this word “knowledge” really entails.

Premise One:  a concept is defined as a mental construction holding various characteristics to identify it by
Premise Two: a connection is directly relating at least one characteristic between two concepts
Conclusion: therefore knowledge is the connections we make between concepts.

In my syllogistic argument, I begin with defining what a concept is. Starting here I am able to delve deeper into my thoughts because I am clearly laying them out. A concept is constructed by our brains as a means to interpret the world around us using the characteristics of the concept. These characteristics are identification towards the concept. An example of a concept widely excepted by our race is the concept of love. This is an intangible thing, and we are unable to fully describe it with

our words, yet we agree that it exists. It is commonly referred to as a feeling, and one will know they are in love when they get the excited feeling in their stomach and protective nature towards this other person. Another concept we encounter daily is the significance of education and its founding effect in society. Uneducated people are seen as useless members of society, people who are not able to contribute anything of great importance regarding development and renovations. Similarly, educated people are given jobs that pay more money because we value knowledge. Which brings me back to my question of when do we know we know something?

My second premise states that a connection between concepts relies on the comparisons you can make between them. For example, between love and the significance of education I can make the connections that they are both woven into the average lifestyle and somewhat forced upon us by our environment. We as humans aspire to encounter and feel love, but why is it so strong? Partly a psychological matter, but also the response of the media, selling us frivolous stories of romance and love. Education is a necessary step towards being able to work in a higher position that McDonalds drive thru attendant. Money is used as an incentive, also reported by the media to be the foundation of happiness.

Therefore I can say I know the concepts of love and the significant of education because I am able to find relationships between the building blocks of each. In a normal day, we will make thousands of connections showcasing our knowledge. An example is seeing the rain outside and then recalling a memory of the unpleasant feeling of being soaked to the bone, therefore knowing in order to stay comfortable we must carry an umbrella. Had I see the rain and not recalled a memory, I would not know that I must carry the umbrella because I was not given a relationship between concepts to form my learnin 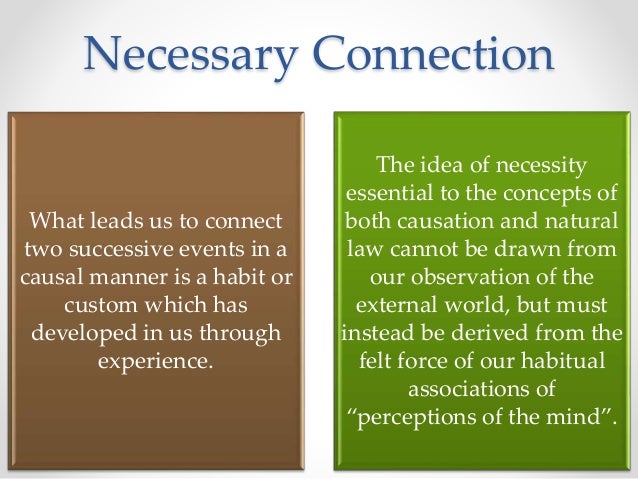 David Hume also had some thoughts about the important of connections in the Stanford Encyclopedia of Philosophy.
His ideas highlight that there is a necessity towards connections and the mental process of forming relationships is crucial to our understanding of the world. He splits it up into Critical and Constructive Phases of the Necessary Connection, but basically its existence of debate gives meaning to its stature. He discusses a relationship between cause and effect. The debate on if its a necessary connection and holds true meaning, or whether we perceive it to make sense of our world. Other natural connections we are able to make are discovering the types of people we find most comfort in or a reason as to why we learn a lesson from certain instances. Drawing our connections from two different sources allows us to expand our mind and lessen the compartmentalization of ideas that often takes place in the school or work place.

In conclusion, knowledge is shown by our ability to draw connections between concepts by determining like characteristics.