“She was asking for it” by Ashlee

After countless nights of pondering, and an infinite amount of research, the vital factor that really helped me solidify my topic was the conversation I had with my good friend, Ben (shout out to you!). The question, “What’s one topic that irks you?” Without hesitation, my reflex answer was rape culture and its discriminatory traits. So, why do these thoughts occur? Where is the foundation of such beliefs? It’s time to dissect what has constantly been bothering me: why is there fear generating from the victims, when what’s been done had an absence of consent? Maybe a step by step analysis will help me (and whoever is reading) at least understand the root of such logic.

Let’s start with validity. The definition of a valid statement is a one that has a conclusion that follows from its premises. Considering such definition, the premises above technically lead to the final conclusion. The argument is structured, putting aside its lack of truth or consideration. If the way women dressed did provoke sexual arousal from men, and if men had a difficult time controlling such desire, then men shouldn’t be the ones to blame. It’s as simple as which party pried it out and which party has less control over their vulnerability. As much as I think it’s quite unprofessional to incorporate personal opinions into my work, I will! Personally, I value the “truth” part of a deductive argument more than its validity; anything can be valid because validity is mostly about its structure. For instance, the argument:

Premise #1: all dogs are astronauts

Premise #2: All astronauts are Spanish

Conclusion: Therefore, all dogs are Spanish With common sense, most people can detect that such argument is blatantly false (although, never take away a dog’s right to become an astronaut). The way that this argument is structured however, is completely valid. This example can be used to prove the importance of both aspects of an argument: validity and truth.

Let’s dissect the truth aspect of such argument:

The first premise that states, “ women dressed provocatively evoke men’s sexual urges” not only comes straight from the ancient prejudice of labelling men to be more aggressive and sexually active, but is false. This generalization is an attack to not only the reputation and characterization of men, but the safety of women (or any sexual assault victims).

The second premise, “men cannot control their sexual urges” is a biased cliché, and there are countless reasons as to why it isn’t factually correct, but let’s state some of the obvious. The real question here is, what is the difference between the sexual desire of a man versus a woman? The common belief that men have a stronger sexual longing than woman, to mark them as “the gender that has the uncontrollable crave to reproduce” is a myth. This myth exists due to the fact that men generally tend to place the emphasis on the outcome of the relation (in this case, sex), while most women might value the relationship, mood, or their partner more. Although this is also a societal image formed over a period of time. There is no solid answer as to how exactly specific genders feel about sex and the amount of control they have; it’s solely dependant on the person. Being aware that many studies have proven that in fact, men do have a stronger sex drive than women, that can never be an excuse to sexual assault. Everyone, no matter the gender, is entitled to a right to safety; it’s unfair for their rights to be taken away because of someone else’s lack of self-control. A more truer statement would be, “some people cannot control their sexual urges”.

With two false (and biased) premises, it’s impossible for the final conclusion to be sound. “Therefore, men aren’t to blame for sexual assault” is technically valid, but far from being factually correct, therefore, not a sound argument. After reading many articles, my ultimate conclusion was that the main cause of rape are the rapists. There might be a higher statistic in a certain cohort or a recurring similarity in sexual assault cases, but that does not change the fact that what potentially caused it was the mindset of the rapist. 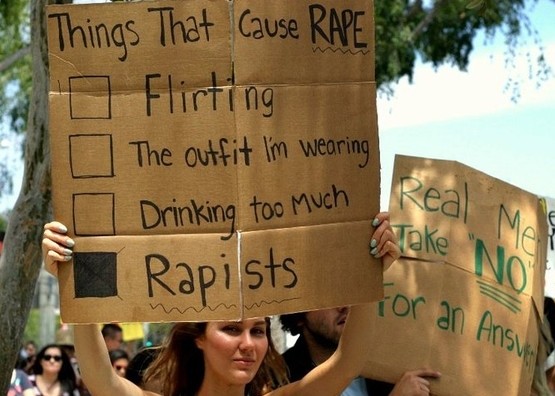 It should never be okay to normalise rape culture. Although, the argument stated above, unfortunately is still the perception of some. I do not aspire to brainwash every single existing misogynist into considering gender equality, yet I do think it’s possible for me to get some people thinking, or at least myself. These things should infuriate us; one of the biggest benefits to such arguments is that it gets us thinking. I do not believe I am doing this “because I’m a woman”, but because violation against other’s rights should never be tolerated. Some might say that this argument is completely sound, but even being the frankly neutral and indecisive person I am, my answer to that is, and will stay in a strong disagreement.

8 Responses to “She was asking for it” by Ashlee