Main Question: Is time an illusion?

At every moment, no matter what, time passes. Unless you own a blue telephone box, you cannot pause, fast-forward or rewind time. Phrases such as “time flies when you’re having fun”, the concept of daylight savings and leap years, have me wondering whether time is real or just an illusion.

Time tells us such things as the duration of events, when they occur, and which events happen before which others. It is also what clocks are used to measure. Time is typically divided into 3 parts, the past, the present and the future.

“Time is only a reflection of change. From change, our brains construct a sense of time as if it were flowing.” -Julian Barbour

2. How was time created?

The oldest known time keeping device is a sun dial from Egypt, that dates to about 1500 BCE. 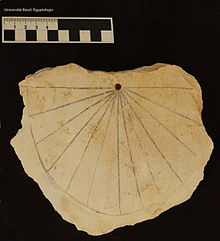 Like the sundial, long ago people used the sun and the moon to keep track of time. A day started when the sun was rising above the horizon and ended when it was below, but all days would not have the same length of time depending on the region and season. In the case of the moon takes about a month to go from the full moon to the new moon. While Egyptians were the first to have a 24 hour day, the Babylonians were the first to divide the hour into 60 minutes, and seconds came later on.

3. Does time have a beginning or end?

This question, like most time questions is controversial. Philosophers Plato and Aristotle believed that the past is eternal. They believed this because for any time there is an imaginable earlier time.

On the other hand, Augustine believed that the universe was made with time and not in time, he implied that time began with God’s creation a finite time ago. Stephen Hawking also believes that the universe has not existed forever. Instead, the universe, and time itself, had a beginning in the Big Bang, about 15 billion years ago.

Learning more about time, creates more confusion and opens up new questions such as : is time relative? is time fundamental? what a world without the concept of time would look like if possible? From my questions, many answers had divided opinions. At this “time”, I do believe that time is an illusion. Although time is incredibly practical, it’s not real in the sense that it exists only because of conventions accepted by humans for their convenience.

“The dividing line between past, present, and future is an illusion” – Albert Einstein