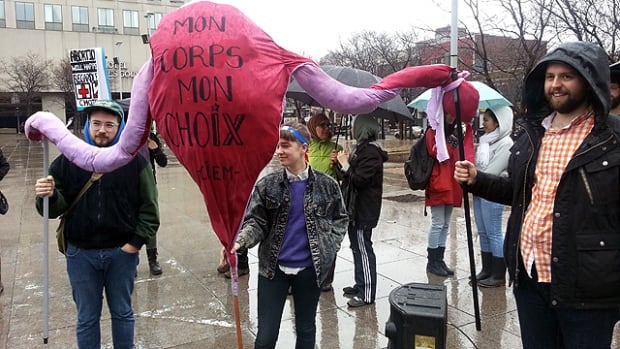 I am one of those people who is rather neutral on many issues, but is strongly opinionated on others. Abortion is one of those. I do understand both sides of the argument and I can identify with those on each side, but I also believe that, on my side, the rewards outweigh the rest. I’m going to try to keep this post at least mostly neutral, but I will discuss my position at the end.

Firstly, abortion has been legalized in different societies for different reasons:

Some people chose to abort their unborn children because of gender or abnormalities. This is called selective abortion and is generally considered “wrong.” Female infanticide is a widely debated issue that can be pursued in Keagan’s post.   Others abort for health reasons, as mentioned above. Even those strongly opposed to abortion can see the other side when presented with the scenario in which the pregnancy is a serious threat to the mother’s health or life. It’s known that a person has the right to defend themselves when in danger, and that violence (which may potentially maim or kill the person from which defense is needed) is acceptable in order to protect oneself from physical harm. This presents the logical conclusion that if the unborn fetus is endangering the life of the mother, she has the right to abort it. Many would argue, however, that the child is not to blame and therefore is undeserving of such a cruel fate.

What if the person causing danger is entirely innocent of any bad intent? What if they are completely unaware that they are posing a threat to someone? What if they aren’t at all responsible for the danger, and are, in fact, not even considered a human being yet?

Also, in some cases, the mother has brought the danger upon herself by becoming pregnant. Does this change the moral argument? Practically, no. If pregnancy kills the mother, chances are that it will kill the fetus as well. The mother, in this case, though, could argue that though she consented to becoming pregnant, she did not consent to having a life-threatening pregnancy.

The fetus could also pose a threat to the mother’s mental health, family, future career(s), financial stability and life plans. Are these as important as her health? You make the call.

BUT- even people who are strongly opposed to abortion can sometimes consider it as an option in cases such as these:

-If there is a serious medical problem (endangers life of the mother or child, there are too many fetuses in the womb, the child will not survive birth)

-cases where pregnancy was unintentional (rape, failed contraceptive, pregnancy caused by a couple not knowing that sexual intercourse causes pregnancy, i.e.  people who are not mentally capable of understanding this.)

Even choosing to abort because of a serious disability brings up an argument.

Allowing abortion of a fetus with a disability permits eugenic abortion – abortion to eliminate disabling genes from the human race. (This is harsh sounding, so I like to replace side 2 with “those with serious disabilities are unable to live a full life and add challenges to not only their own lives, but to those around them.”)

Now. The most prominent part of the abortion debate is that ‘ending a life is bad.’ If we consider murder to be ‘bad,’ isn’t abortion pretty much the same thing, and therefore worthy of the same punishment?

…. I’m not going to answer that question.

When people talk about ‘human life’ they may mean a being that is a member of the biological ‘human’ species that has the human genetic code. They also may mean a being that possesses certain human characteristics in addition to the human genetic code, such as the ability to think and communicate. When does a fetus have the rights to life? When does life begin? One of my friends gave me an example a while ago that I think applies perfectly to this. If you  have one grain of sand sitting in front of you, would you call that a pile of sand? Probably not. How about two? Three? Forty five? When does the cluster of grains of sand become a pile? Is your unborn child alive when it’s born? How about the day before it’s born? Or the day before that? Etc.

I did some research on that and there’s actually no answer, so I will just leave that up to your personal thoughts. You can read a bit about it here, if you like.

Anyway. I’ve presented both sides of the argument, so now I will give my personal opinion. I think that abortion is a good option to have available to all women. I think that women have the right to control their own body and decide whether they would like a potentially health-threatening creature live inside them for forty weeks. Banning abortion puts women at risk, because this will force them to visit illegal abortion centres. I found a website with a nice syllogism on exactly this:

There was a guy in my socials class who was talking to me about abortion about a week ago. He was against abortion. His argument was that the child’s existence was not its fault, therefore it doesn’t deserve to be killed.    He was very devout in this and actually turned away when I tried to present my argument. Now, I totally understand his side, but will HE ever get pregnant? No! He’s a guy. Yes, his opinion is valid and appreciated, (don’t get me wrong, I’m not in favour of killing babies, just preserving health and safety) but personally, I think that if a person is voicing an opinion on a subject that refers to the health of the opposite gender, they should stop talking unless they are willing to see both sides.

Pregnancy is dangerous and really, really uncomfortable. (I had to be fake pregnant for a day for a class last year and it was possibly the most uncomfortable thing I’ve ever experienced ever. I can’t imagine doing it for the greater part of a year.) I love children. Babies are great. Just, sometimes other considerations need to be made when it comes to something as serious as they are. Having a baby isn’t like getting a puppy. I know that some people use abortion as a method of birth control. I do not approve of this, but I think that it’s the mother’s choice. For those people that argue solely that killing children is wrong, keep in mind that it is the mother who will keep this on her mind for her whole life. She knows what she is getting into.

So. After possibly the longest blog post I’ve ever written, I hope that you have gained a new opinion on this very touchy issue. http://www.bbc.co.uk/ethics/abortion/ has a lot of great information, if you’d like to see more, as well as Misha ‘s post here.